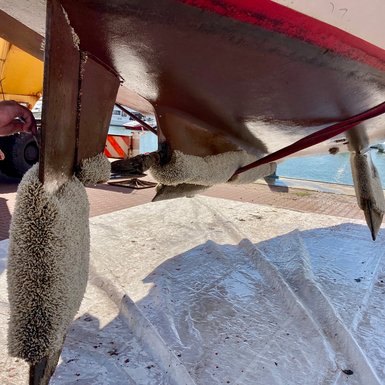 From year to year there are also biological news in our work. In 2020 some boat owners in brackish water harbours like Hooksiel or Emden have experienced a nasty surprise. Within a short period of time, some ships and jetties had been colonized en masse with the Australian lime tube worm (Ficopomatus enigmaticus). The species occurs mainly in brackish water and was first detected in Europe (Caen, FR) in 1921 and in Germany (Emden) in 1975. The worm is sensitive to cold, but relatively insensitive to salinity fluctuations. On Norderney, too, a sailing ship arriving from Emden had to be craned out of the water and cleaned due to the massive infestation (see photo). The functioning antifouling coating on the hull prevented the settlement of the worm very well. However, all the more problematic were the areas that could not (could not) be painted, and those where the coating was rubbed off, e.g. by touching the ground.

In brackish water harbors, there have been some boat owners who have renewed the coating less frequently in order to protect the environment and their wallets. Due to the lower fouling pressure during voyages in changing salinities this also worked. It seems that this is now for the time being no longer so easily possible with longer moorings in Hooksiel or Emden.